Americans urged to wear masks outside as coronavirus pandemic worsens

WASHINGTON/NEW YORK (Reuters) – The Trump administration on Thursday looked set to join local officials in advising Americans to wear masks when venturing out during the still-exploding coronavirus pandemic, as the U.S. death toll rose by 1,000 in a single day for the first time.

Speaking at a White House briefing, Deborah Birx, a member of President Donald Trump’s coronavirus task force, said the U.S. Centers for Disease Control and Prevention (CDC) would in the coming days add a recommendation on masks to guidelines on protective measures.

But Birx said Americans, almost all of whom have been told to stay at home except for essential outings, should not develop a “false sense of security” that they are fully protected from the respiratory illness by covering their faces.

Trump, answering questions from reporters at the briefing, said only “if people want to wear them, they can.”

As of Thursday evening the U.S. death toll from COVID-19, the respiratory illness caused by the coronavirus, stood at 5,887, with more than 243,000 cases across all 50 states.

Global cases surpassed 1 million on Thursday with more than 52,000 deaths, according to a Reuters tally based on country-by-country data.

White House medical experts have forecast that between 100,000 to 240,000 Americans could be killed, even if the sweeping lock-down orders are followed.

The Trump administration, CDC and public health officials have all wavered on the issue of face masks since the pandemic broke out, initially telling healthy people such measures were unnecessary or even counter-productive.

NOWHERE TO PUT THE DEAD

The mayors of New York City and Los Angeles both urged residents to cover their faces. New York Mayor Bill de Blasio cited studies showing the virus can be transmitted by infected people who are showing no symptoms.

“What that means is when you put on that face covering you’re protecting everyone else,” de Blasio said.

The Democratic mayor suggested New Yorkers use scarves or other home-made masks because medical-grade protective gear was in short supply.

An emergency stockpile of medical equipment maintained by the U.S. government has nearly run out of protective garb for doctors and nurses.

In New York City, where at least 1,400 people have been killed by the virus, hospitals and morgues struggled to treat the desperately ill and bury the dead.

Funeral homes and cemetery directors described a surge in demand not seen in decades as cases surpassed 50,000 in the city.

A protective face mask is seen on the dashboard of a REACT EMS ambulance in Shawnee, Oklahoma, U.S., amid a coronavirus disease (COVID-19) outbreak April 2, 2020. REUTERS/Nick Oxford

Crematories extended their hours and burned bodies into the night, with corpses piling up so quickly that city officials were looking elsewhere in the state for temporary interment sites.

“We’ve been preparing for a worst-case scenario, which is in a lot of ways starting to materialize,” said Mike Lanotte, director of the New York State Funeral Directors Association.

At Brooklyn’s Wyckoff Heights Medical Center, staff were seen disposing of gowns, caps and other protective gear in a sidewalk trash can on Thursday after loading bodies into a refrigerated truck.

Reuters was unable to confirm whether the bodies were those of coronavirus victims and hospital administrators could not be reached for comment. Operator Beatrice Pereira said, “They said that there’s no one available right now, that everyone here is busy saving lives.”

The U.S. Navy relieved the commander of the aircraft carrier Theodore Roosevelt after he wrote a scathing letter appealing for help to control a coronavirus outbreak onboard, U.S. officials told Reuters on Thursday.

Asked about the captain during a news conference at the White House, Trump said he did not agree with the suggestion that it appeared the commander was being removed for trying to save the lives of sailors. 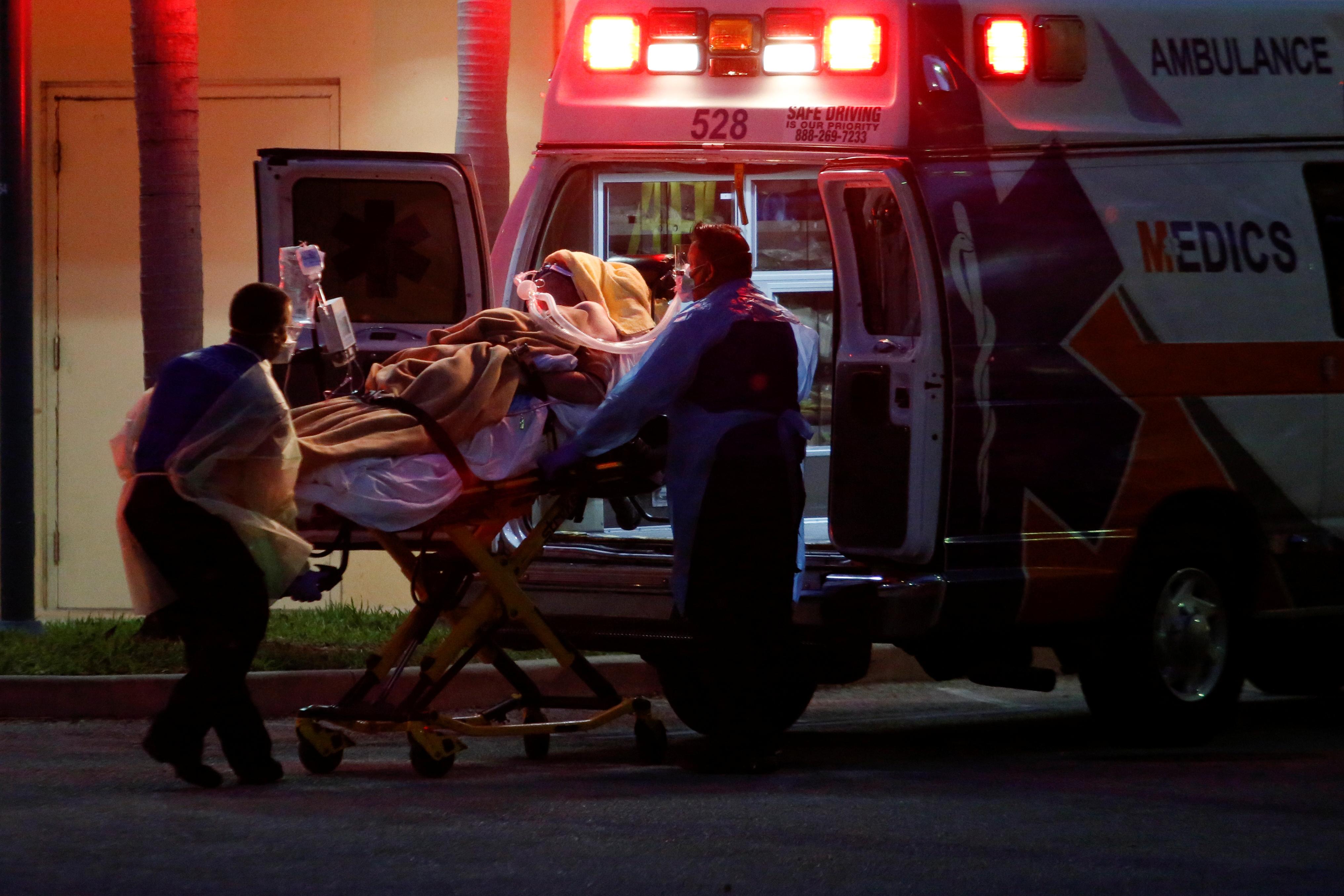 With an estimated 90% of Americans under unprecedented orders to remain at home, the U.S. government reported that a record 6.6 million workers had filed for jobless benefits last week, double the previous all-time high set a week earlier.

The Walt Disney Company said it would start furloughs of non-essential U.S. employees across the company on April 19. It did not say how many would be affected.

In Florida, two Holland America cruise ships with dozens of sick coronavirus patients aboard docked at a port near Fort Lauderdale, resolving a days-long impasse.