GEYSERVILLE, Calif. (Reuters) – A wind-driven wildfire that forced some 2,000 people to flee homes in Northern California’s wine country on Thursday erupted near the base of a damaged high-voltage transmission tower owned by Pacific Gas and Electric Co, utility and fire officials said.

The company, a unit of bankrupt holding company PG&E Corp (PCG.N), acknowledged in an “electric safety incident” report to the California Public Utilities Commission that one of its power lines malfunctioned at about the time and location of the fire’s origin on Wednesday night.

It said a PG&E technician inspecting the site on Thursday found the area taped off by state fire department personnel who brought to his attention “what appeared to be a broken jumper on the same tower”.

PG&E had shut down some electric distribution wires in the area as a precaution against dangerously high winds at the time, but high-voltage transmission lines such as that in question were left on as they were deemed durable enough for the forecast conditions, the utility said in a public statement.

The transmission tower involved had been examined this year in PG&E’s wildfire safety inspection program, it added.

Neither PG&E nor the commission said whether the damaged tower or the malfunctioning transmission line attached to it were suspected of igniting the blaze, dubbed the Kincade fire, which has destroyed about a dozen homes and other structures.

The cause is being investigated, said the California Department of Forestry and Fire Protection, or Cal Fire, which listed the same place and time of origin for the fire as the tower incident reported by PG&E.

PG&E filed for bankruptcy protection last January, citing more than $30 billion in liability stemming from devastating wildfires in 2017 and 2018 found to have been sparked by its equipment.

The Kincade fire in Sonoma County was the worst of several blazes raging throughout California as PG&E and other utilities cut off electricity to nearly 200,000 homes and businesses in preventive blackouts to reduce wildfire risks from high winds.

Hundreds of miles to the south in the Canyon County community of Los Angeles County, a blaze called the Tick fire prompted evacuation of an estimated 40,000 residents. Flames consumed about 5,000 acres (2,000 hectares) and destroyed an unknown number of structures, according to the Los Angeles City News Service.

By Thursday, the Sonoma County blaze had scorched about 10,000 acres (4,000 hectares), Cal Fire said. No injuries have been reported.

The Sonoma County sheriff’s office ordered the evacuation of Geyserville, a town of nearly 900 people, founded in the mid-19th century and named for nearby hot springs and geothermal attractions.

A firefighter walks by a burning tree along Red Winery Road during the Kincade fire in Geyserville, California, U.S. October 24, 2019. REUTERS/Stephen Lam

A Reuters photographer saw about a dozen homes in flames in the town on Thursday.

By midday, mandatory evacuation notices covered a total of roughly 2,000 people, the sheriff’s office said. An evacuation warning in the northern end of the nearby larger town of Healdsburg, urged residents to be ready to flee at a moment’s notice.

Both towns, about 75 miles (120 km) north of San Francisco, are hubs of upscale restaurants, wine-tasting rooms, inns, and shops surrounded by rolling hills dotted by vineyards.

Large parts of California were under red-flag alerts this week following forecasts of hot, dry winds blowing into populated areas from deserts to the east.

The number of homes and workplaces without power could climb to more than 500,000 under worst-case scenarios for precautionary outages this week, according to PG&E, Southern California Edison (EIX.N) and other electricity providers.

PG&E said in a statement on Thursday it had shut off power for about 178,000 houses and businesses in northern California during an Oct. 23 public safety power shutoff (PSPS) event.

The company has restored power to 93% of those customers following announcements that the weather was “all-clear,” the statement said.

“Safety patrols, inspections and power restoration took place throughout the day and continues through the night,” PG&E said, adding that it expects power to be restored to all customers on Friday, unless any equipment is damaged and needs repair. 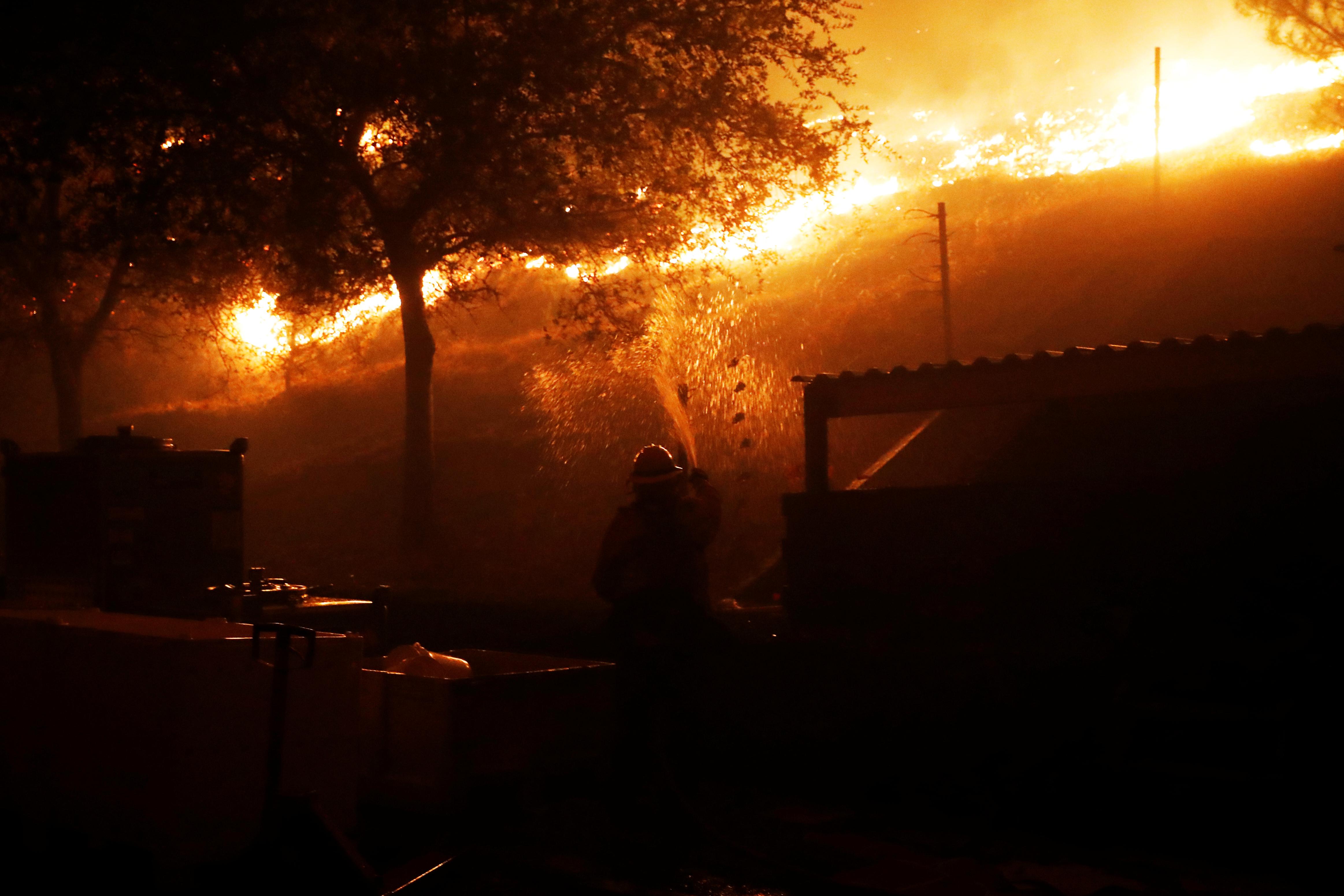 Marc Chenard, a forecaster with the National Weather Service’s Weather Prediction Center, said that while the winds have abated for Friday in northern California, the area is in for more high winds this weekend.

“Yes, it’s improving, most of the warnings there have been lifted for now,” Chenard said. “But we have another (wind) event coming in for Saturday and at least through Sunday. This isn’t over.”

Earlier on Thursday, California Governor Gavin Newsom, who called PG&E’s handling of that incident “unacceptable,” said the company appeared to have “significantly” improved its readiness for this week’s wildfire threat.

Chenard said that hot dry winds, called the Santa Ana winds in Southern California east of San Bernardino and down to San Diego are expected to continue through the weekend.