A sudden downpour made parts of Central Avenue impassable Thursday and ensnared vehicles attempting to negotiate the high water.

The National Weather Service issued a flash flood warning for Garland County at 12:27 p.m. as about 2 inches of rain overwhelmed storm drains along the Central Avenue corridor. Several vehicles bogged down in the high water before intersections at Files and Franklin roads were closed.

Hot Springs Public Works Director Denny McPhate said it took the city’s utility department about 45 minutes to clear the Files intersection using portable hydraulic and diesel pumps. They removed the remnants of what the city’s seven rain gauges showed was 1.63 to 1.87 inches of rain.

“That happened in about an hour and 20 minutes,” he said, suspecting that the storm drain carrying runoff from the state highway to ditches along Lakeland Drive may have been obstructed or collapsed. “It’s not draining properly. We’ll have to do some investigating or talk to the (Arkansas Department of Transportation) and have them do some investigating on what might be going on there. We’ve never had that happen there before.” 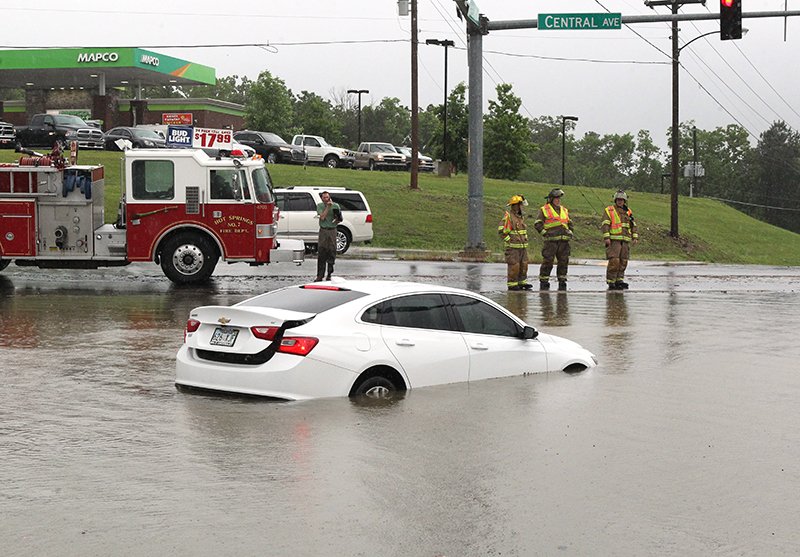 The Sentinel-Record/Richard Rasmussen STANDING BY: Emergency crews stand by the Files Road intersection on Central Avenue, where several vehicles flooded after motorists attempted to negotiate the flood waters.

The National Weather Service said Garland County had about 2.2 inches of rain, with the storm increasing in intensity as it moved to the northeast. NWS meteorologist Lance Pyle said damage was reported near the Interstate 30 and 430 interchange in Pulaski County.

The Franklin intersection is in a low spot, with Central 20 to 30 feet below areas to the east and west. McPhate said it floods about once a year.

“It’s so old, I’m not sure the Franklin drain is sized for a 25-year event.” he said, explaining that storm drains are typically designed for a 25-year flood. “If we get an abnormally heavy rain it will flood, but it won’t last longer than 15 or 20 minutes. (Thursday) was at least a 25-year event with that much rain in such a short period of time.”

Airport Director Glen Barentine said water almost reached the terminal at Hot Springs Memorial Field. The parking lot conveys water from Airport Road to the terminal entrance during heavy rain events, Barentine said, as the terminal is about 20 feet below the road. He said recent improvements to the entryway off Airport slowed the water down, giving it time to fall into storm drains, but Thursday’s downpour still presented problems.

“It helped control it, but if it had rained another 20 minutes the terminal would’ve been flooded,” he said.

Garland County Department of Emergency Management Director Bo Robertson said first responders reported flooding in the southern part of the county at the 400 and 500 blocks of Mountain Carmel and South Moore roads.

Entergy issued a high-water notification Thursday when the releases from Remmel Dam exceeded 30,000 cubic feet of water per second. The flows from Remmel peaked at 55,920 cfs at around 4:15 p.m. Thursday. Entergy Arkansas Inc. officials said in an email they expected them to decrease from that point, and had begun to close the spillway gates.

Around 5 p.m., Entergy said in an email that the flows from Remmel had dropped to 29,990 cfs and receding, with no additional significant rainfall expected for the watershed area, so it was deactivating its response plan.

“Both lakes Hamilton and Catherine stayed within their normal pool levels and are currently stable,” the email said.

“Carpenter and Remmel dams are not able to retain flood waters in the way that Blakely Mountain Dam can and must pass all of the inflow received from rainfall through the dams via generation flow and opening gates,” Kimberly Bogart, Lakes and Property coordinator with Entergy Arkansas Inc., said Thursday.

While Blakely Mountain Dam, which is managed by the U.S. Army Corps of Engineers, received about three-quarters of an inch of rain the last 24 hours, Carpenter and Remmel rain gauges reported about 1.5-2 inches in the five hours between 8 a.m. and 1 p.m. Thursday, Entergy said.

“Thankfully this flash flood storm has passed through our area quickly,” said Bogart. “Without an ongoing sustained rainfall this event should be much shorter than those experienced in the past with prolonged periods of rainfall.”

“Like the area streets that became flooded during this event, areas of the lakes experienced significant changes in water levels due to the runoff caused by this flash flood. The lakes, as a whole body of water, react differently than the streams and tributaries that lead to them. Much of the flooding seen in the city of Hot Springs entered directly into Lake Hamilton, which fluctuated six-tenths of a foot during this event. With less rain falling in the smaller watershed that feeds Lake Catherine, passing those flows from Hamilton though Lake Catherine caused it to vary just over three-tenths of a foot during this event,” Entergy said in an email.

Rain chances are in the forecast today and Saturday. Pyle said skies are expected to clear by Sunday.

The Sentinel-Record/Richard Rasmussen TREE DOWN: Traffic on Park Avenue was rerouted through Gorge Road and Sleepy Valley after a tree fell across the roadway just north of the Gorge Road intersection. A power outage in the area around the fallen tree affected around 170 Entergy Arkansas Inc. customers.