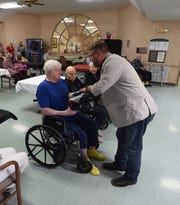 “Let me say thank you to our veterans here today, and the families that support their veterans,” said Crawford after presenting the flags and quilts.

“You’re looking at The Greatest Generation here,” Crawford said. “They made the sacrifices they did so that we can live free today.” 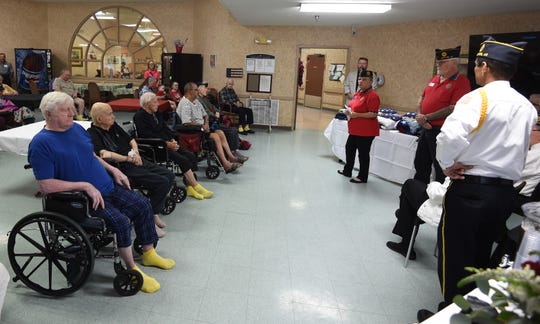 The American flags presented to the veterans Friday had each been flown over the U.S. Capitol building at Crawford’s request in recognition of each recipient’s service to his country. A certificate accompanied each flag, mentioning the recipient’s name and that the flag had flown over the Capitol.

Friday’s ceremony was held in Gassville Therapy and Living’s dining hall, with the honored veterans lined up at the front of the room. Family and staff members sat behind them, offering up applause as Crawford shook each veteran’s hand, presented them a flag and quilt, and spoke with each recipient.

“We appreciate the honor of allowing us to do this,” Linda Reed, post adjutant of the Cotter American Post, told the group of assembled veterans.

Crawford, the U.S. representative for the state’s 30-county 1st District, spent Friday in the Twin Lakes Area before heading back to his hometown of Jonesboro that evening. The congressman began his day by visiting a local radio station, then participated in several meetings that afternoon after leaving Gassville Therapy & Living. 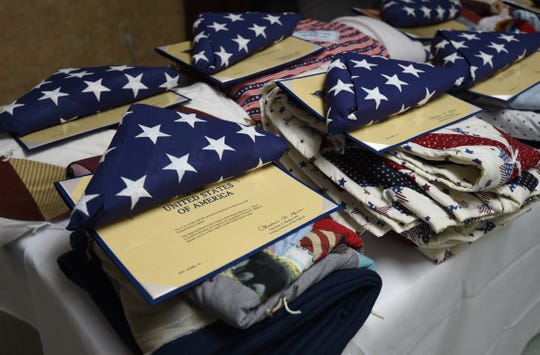 “Sometimes we lose sight of the sacrifices that the military makes in general,” Crawford told The Baxter Bulletin following the veterans ceremony. “We refer to these guys as ‘The Greatest Generation,’ and a lot of these guys were World War II veterans. The sacrifices and what they did in World War II, I just don’t think you can overstate it.”

Crawford is as veteran himself, having served as an explosive ordinance disposal technician in the Army from 1984 until 1988.

“If I’m being quite candid, (the World War II veterans) are disappearing. There are very few of them left,” Crawford said. “So in the time we have left with them, we want to take every opportunity that we can to recognize their service and sacrifice.”

Watch: Costco opens in we...