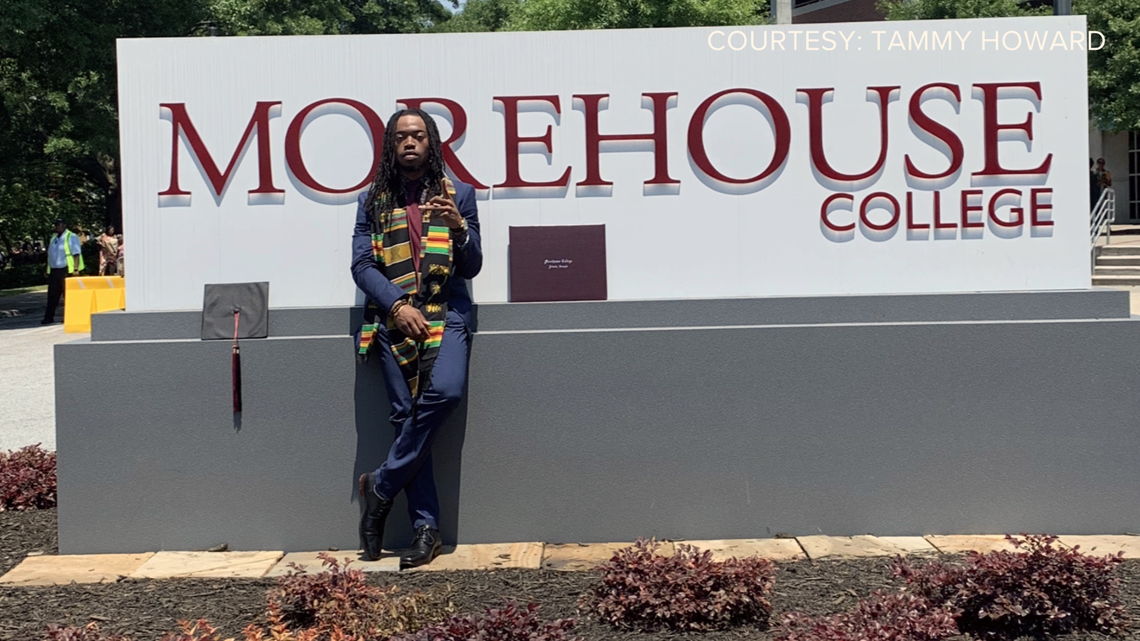 LITTLE ROCK, Ark. — Forty million dollars is quite the graduation present, so when Robert Smith told the Morehouse College graduating class of 2019 that he was paying off all their student loans, it made people around the country take notice.

“Driving home, for me, [Tuesday night], that was probably when I got the most emotional about it,” Evan Howard said, “because it actually hit me that I’m actually coming home with my diploma.”

Howard returned to Little Rock as a proud college graduate, and one who would not have to worry about paying off his degree. He was one of the 396 graduates lucky enough to receive Smith’s pledge of generosity.

“It didn’t really hit me personally,” Howard said, “until it was all over, and until I actually thought about what that blessing, what his gift really could do for me and my other Morehouse brothers.”

Howard said he and many of his classmates were exhausted when Sunday morning’s commencement ceremony finally began. After the end of classes, he said he and his friends tried to celebrate their impending graduation as much as they could. Then, Morehouse put them through a busy weekend of rehearsals and events before the big day.

“We had first arrived at school at 5:30 a.m., so we had already been out in the sun for probably, like, three, four hours prior to Mr. Smith getting up and speaking,” Howard recalled. He said he and several other students left the stadium floor to get water in the concourse.

“And it just so happened that, when I sat down, that’s when he ended up saying, you know, your student loans will be paid off,” Howard mentioned.

“And At that time—sitting there, worried about the heat, being tired from earlier in the day—I wasn’t really, what he said didn’t really register to me at first.

“And it didn’t register until my mom had called me. And she basically asked, ‘did you hear what he just said?’ And my response to her was, ‘I hear what he said, but wait one second.’ And I ended up tapping the brother on the left of me and the brother on the right of me and asking them did they hear the same thing, as well. And it turns out that, you know what I’m saying, they did. And I ended up getting back on the phone with my mom and letting her know, basically telling her, ‘Mom, you’re not crazy. He said that. Im’ma be quiet and listen if he got anything else to give out!’”

Smith’s speech and announcement came near the beginning of the ceremony.

A couple of hours later, after walking across the stage with his classmates, Howard saw clips of the speech on outlets such as TMZ and started to grasp how stunning Smith’s pledge was.

“I don’t know when I will completely grasp the totality of what Mr. Smith was able to do for us,” he added.

Howard said college was a difficult period in his life. He enrolled in Morehouse because he wanted to become a cardiologist and Morehouse had a reputation as one of the best schools for black men who wanted careers in medicine.

But what he would only describe as a personal incident took him away from school.

“My mental health took a hit,” he stated, “but the thing that essentially kept me going—or, that made me persevere—was the fact that I am from here. And not so much that I don’t want to come back, but I want to have something to say for me leaving. And so, for me to go through whatever I went through and then to come back home, I felt like that would be quitting. And I wasn’t raised to quit.

“And I’m just very fortunate and blessed that this was the blessing at the end of the tunnel. Not just graduating, but having my loans paid off. And, like I said, for that, I’m eternally grateful.”

The time away also changed Howard’s academic focus. “I got really interested in African-American male mental health, and so I switched my major to psychology,” he said.

Howard would not say how much student loan debt he had, other than to call it “a lot.” Federal data show that typical Morehouse grads leave with $26,000 in student loans, but some experts think the number might be closer to $100,000 apiece.

That puts the value of Smith’s pledge between $10-40 million.

“No one has ever done something like this before,” Howard noted. “Ever. And the fact that he did it for us, and I guess he took it upon himself to be, to, to say that I’m gonna be the man to do this, that takes an immense initiative.”

Howard said he believes the gift was a way to empower black men who have the potential to become leaders. “I feel like the challenge that he posed to us was that y’all already knew that y’all were gonna be great,” he said. “Now y’all have the latitude and the fiscal ability to actually be great in the ways that you want to be great.”

The announcement made headlines around the country, bringing Morehouse College a level of attention it might not have ever received before, and Howard knows that attention may follow its graduates for years to come.

“And that’s why I feel like, like I said, there is pressure, but it’s really good pressure because we’re under pressure to show the world that his gift wasn’t in vain. And, I would say, the caveat, or the good part about that is, every single one of the men that walked across that stage has it in them to shine. If not as bright as the man who gave us that gift, 10 times brighter.”

Howard said Wednesday that he excited to carry out Smith’s vision to improve the world. “But not just pay it forward in a generic way,” he explained, “but pay it forward in a way to you see fit and that makes you—I don’t want to say makes you happy—but that has your heart all the way wrapped up in it.”

Howard’s heart is in improving mental health care for black men. He said he wants to pursue a career as a forensic psychologist.

He figures that will mean going to graduate school, but knows that will be much easier for him to afford since he does not have to pay for his bachelor’s degree.