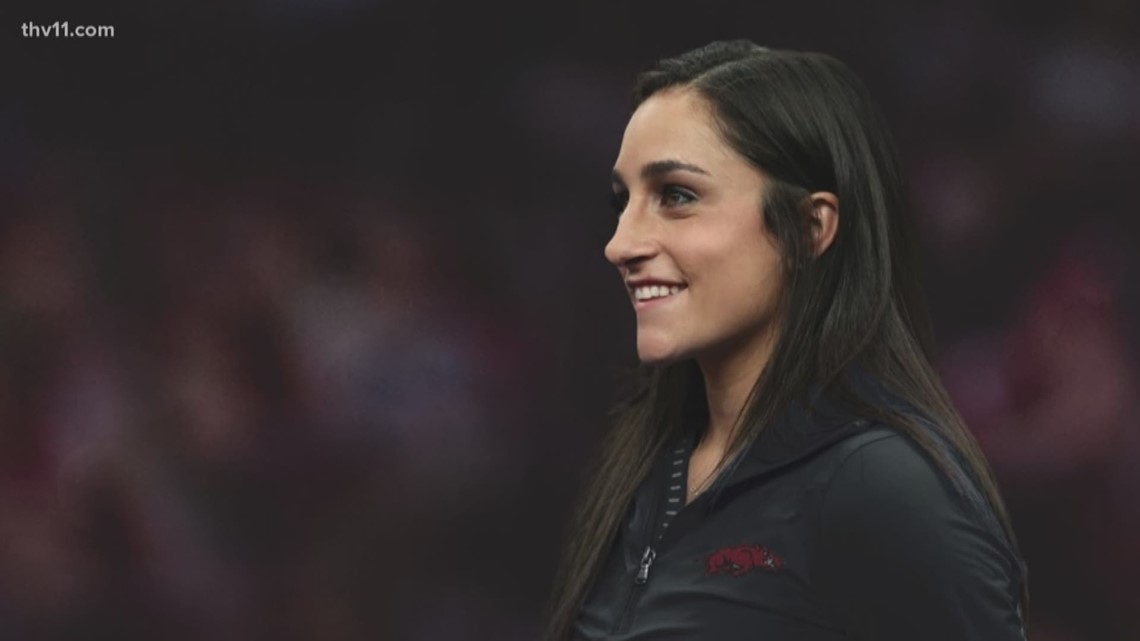 Not often does a gymnastics hire sends shockwaves throughout the entire state, but that was the case Wednesday when the University of Arkansas hired Jordyn Wieber as its next head coach.

“I think it’s fun that she came to Arkansas to coach the Gymbacks,” Emerson Martin said.

Martin was one of dozens of young gymnasts practicing at River City Gymnastics Wednesday evening. As they bounced around the various stations in the gym, part of the energy in the building came from the reaction to Wieber’s hire.

“First of all, she’s my favorite gymnast,” Danica Kilton explained. “But, I think she’ll be a really good coach for University of Arkansas. I think she can do a lot for our gymnastics program.”

Wieber was the world all-round champion in 2011 and part of the “Fierce Five” that won the team gold medal in the 2012 Olympic Games in London.

Emma Grace Knight said she remembered that performance clearly, as well as Wieber’s contribution to it. “Her leadership with the team,” she stated. “She’s such a good role model to all the other gymnasts who were on the team with her.”

“I remember watching her,” Kilton added, “and I was like, ‘oh, I want to be just like her when I’m older.”

Older is not a word often used to describe Wieber, who at the age of 23 is one of the youngest coaches in all of college athletics. She spent the last two years as an assistant at UCLA and was hired at Arkansas just days after helping the Bruins to a national championship. Some might argue that her inexperience as a coach might be a detriment, but Knight disagreed.

“I think she can connect well with the gymnasts,” she stated, “cause they’re pretty much, almost close to her age, and I feel like she’s gone through some of the same stuff as they’re going through right now.”

“I mean, they’re already really good right now, but I think they can definitely improve,” Cauley said. “And I think she’ll definitely help them get up to the first, second, third, you know?”

Wieber has a maturity beyond her years, however. She was one of Larry Nassar’s victims, and she testified in court and in Congress to try to protect other athletes from sexual abuse. In doing so, she demonstrated some of the same qualities that made her a fan favorite when she competed.

Cauley said she admired Wieber in 2012 because of, “her bravery. She went through a lot that year. She had some injuries, but she did really well and was a great role model for everybody.”

This job will be a return, of sorts, to Arkansas for Wieber. She joined Simone Biles, Aly Raisman, Gabby Douglas, Nastia Liukin, and other Olympic champions when the Kellogg Tour of Champions performed at Verizon Arena in North Little Rock in October 2016

Cauley was one of many aspiring gymnasts in the crowd that night. “I mean, it’s one thing to watch her on TV, but to watch gymnasts like that in person, it’s a whole different experience,” she said, “and it was really impressive and motivational.”