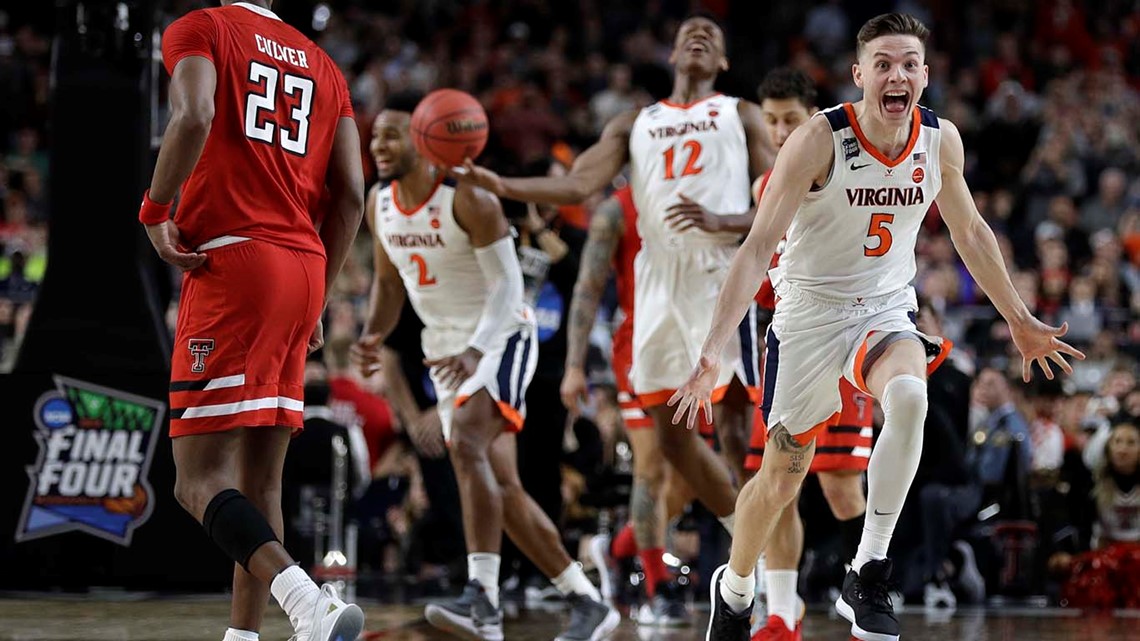 MINNEAPOLIS — Now that, Virginia, is the way to close out a season.

And quiet those critics, too.

Led by De’Andre Hunter and his NBA-ready game, the Cavaliers turned themselves into national champions Monday night, holding off tenacious, ferocious Texas Tech for an 85-77 overtime win — a scintillating victory that came 388 days after a crushing setback that might have sunk a lesser team for years.

But Virginia was better than that.

A season after becoming the first No. 1 seed to lose to a 16 — the one thing that had never happened in a tournament where anything can — the Cavaliers watched a 10-point lead turn into a 3-point deficit before Hunter came to the rescue. The sophomore made the game-tying 3 with 12 seconds left in regulation, then made another with just over two minutes left in the extra period to give the Cavs the lead for good.

“Surreal,” Hunter called it. “It’s a goal we started out with at the beginning of the season. We knew we were going to bounce back from last year. We achieved our dreams.”

After going scoreless for the first 18 1/2 minutes, Hunter finished with a career-high 27 points, and if he leaves as a lottery pick — well, what a way to go.

He helped the Cavs bring home the first NCAA title for a program with a colorful, star-crossed and, now, very winning history.

Ralph Sampson was in the house, but now it’s possible that Sampson and the name “Chaminade” won’t be at the top of Virginia’s resume anymore.

Or “University of Maryland-Baltimore County.” That was the No. 16 seed that stunned the Cavs in the first round last year, its playful social media manager online Monday night tweeting congratulations shortly after the final buzzer. Hunter missed that game with a broken wrist, but nobody thought they’d miss him THAT much.

Each of Virginia’s 34 wins leading to the final, and each of its scant three losses, were all punctuated by the reminder that only the end result would serve as the ultimate report card on whether the Cavs could truly shed the baggage of last year.

What a ride this was.

A 1 seed once again, they fell behind by 14 early to 16th-seeded Gardner-Webb in this year’s opening round, and a nightmare seemed to be unfolding. But this time, they overcame it. Then, they beat Purdue in the Elite Eight when the game looked lost, and did the same against Auburn on Saturday — getting bailed out by a foul call and Kyle Guy’s three free throws with 0.6 seconds left.

“I told them, I just want a chance at a title fight one day,” Virginia coach Tony Bennett said. “That’s all I want. … You’re never alone in the hills and the valleys we faced in the last year.”

Hunter’s key 3 in OT gave Virginia a 75-73 lead, and after the teams traded possessions, Tech guard Davide Moretti scrambled after a loose ball heading onto Virginia’s end of the court. It appeared it would be Texas Tech ball, but a replay showed Moretti’s pinkie finger had barely scraped the ball. Virginia got possession, and worked the ball into Ty Jerome, who got fouled and made two free throws.

Brandone Francis missed a 3 on the other end, and Virginia pulled away — the first time this game felt remotely comfortable, even after Guy made a 3 to give the Cavs a 10-point lead with 10:22 left in regulation.

Guy is not Virginia’s only clutch free-throw shooter, by the way. The Cavs went 12 for 12 from the line in overtime to ice this game. They scored the game’s final 11 points.

The team full of overlooked grinders refused to quit.

They fell behind by 10 twice in this game — seemingly too much in a matchup between two legendary defenses that allowed way more than the projected total of 118 points — but just kept coming back.

Jarrett Culver, also lottery-pick material, made a spinning left-handed layup over Hunter with 35 seconds left in regulation to put the Red Raiders ahead 66-65. After Jerome missed a teardrop on the other end, Norense Odiase got fouled and made two free throws to make it 68-65.

The nation’s best defense couldn’t afford to give up a 3, but Jerome skipped a pass to Hunter, who was open on the wing — and spotted up and drained it. Culver missed a 3 with Guy in his face with a second left, and we were headed to overtime, the first extra session in the final since Kansas beat Memphis in 2008.

“In terms of my guys, I’ve never been more proud,” Red Raiders coach Chris Beard said. “This is real life. We’ll bounce back.”

The last five minutes of regulation and the OT featured several one-on-one matchups between the two NBA-bound stars, and Hunter came out the winner. He finished 8 for 16 after an 0-for-7 start. Culver, who stayed in his hometown of Lubbock to see how far he could take Tech, went 5 for 22 for 15 points, continuing a cold-shooting Final Four; he went 8 for 34 over the weekend.

Both will likely move on to the NBA. Hunter will go there with a title.

And somebody on Virginia ought to grab that sign.

In the stands, a fan made a cardboard sign with the capital letters “UMBC” running vertically, and this spelled out after each letter. “Uva.” ”Makes.” ”Big.” ”Comeback.”

The Cavs couldn’t have written it any better themselves.