Try them on for size 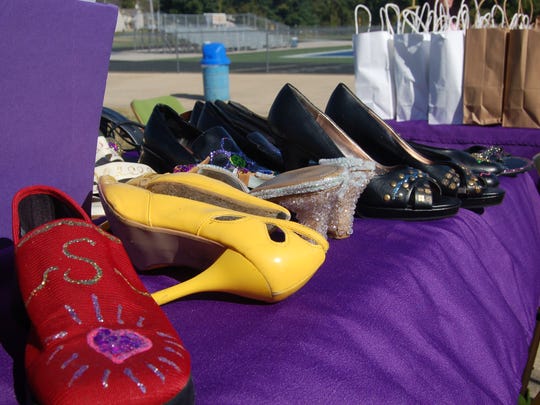 In this Bulletin File Photo, women’s shoes are shown at a previous Walk a Mile in Her Shoes event benefiting Serenity, Inc. (Photo: JOSEPH PRICE)

(Editor’s Note: Helen Mansfield, who is a frequent reporter and photographer for The Baxter Bulletin on a freelance basis, is a full-time employee of Serenity Domestic Violence Support & Shelter, serving as a shelter advocate. This is the first of two stories that will run on events the shelter is hosting during the month of October as part of National Domestic Violence Awareness Month.)

When most people think of October, they think of autumn, harvest time, the changing colors of leaves and Halloween. Overall, it’s a fun time for children and adults alike.

It’s almost unfair that the month of October is also National Domestic Violence Awareness Month — not necessarily a fun topic to discuss — but one that should not remain in the dark, spooky shadows.

The staff, board and volunteers of Serenity Domestic Violence Support & Shelter are using October to spread awareness about domestic violence in the Twin Lakes Area, and hope to provide some levity at the same time.

According to Serenity Shelter Director Donna Forrester, this year’s Walk a Mile in Her Shoes event is being wrapped into the first ever District Street Festival on Saturday, Oct. 26.

The “walk” event is open to male runners or walkers. The goal of the event is to complete four laps around the square while donning a pair of high-heeled shoes, bedazzled flip flops or fuzzy house shoes.

The event previously took place at the track over at Mountain Home High School.

“I think it’s been well received,” Forrester said of the fundraiser. “People have have had a lot of fun with it.”

Participants must pay an entry fee of $25 and sign a waiver to participate. Those interested can sign up now, or show up the day of the event, which will run from 4-6 p.m.

Shoes will be available the day of the event for those who haven’t planned ahead.

She said there’s really no wrong way to raise funds for the event. Participants can get sponsors to pay for their entry, and adds that she would like to see teams of runners/walkers challenge other teams for bragging rights.

Awards will be handed out in four categories: for fastest walker/runner, best costume, highest heel wearer and the best overall performance.

Forrester said she’s heard from a number of previous competitors that they will sign up again this year, and thinks that the new setting will bring out more entrants and observers, while spreading the word about Serenity and awareness about domestic violence.

She adds that if the day of the festival isn’t too windy, they may put up a “silent witness” project. The display consists of silhouettes representing a real victim of domestic violence.

Forrester has been with Serenity for seven years. She started in the fall of 2012 as volunteer and a year later she became a member of the advocate staff. The shelter has three overnight advocates who serve as the shelter equivalent of a “dorm Mom.”

Advocates oversee the residents in the shelter by providing a compassionate, non-judgmental person who can listen to their ordeal. Advocates also ensure the residents perform chores to keep the shelter clean and do any “homework” assigned by the caseworkers.

Serenity takes in women who range in age from their early 20s to senior citizens. They can even house men, who have been abused by a partner.

Residents are allowed to bring their children, and has kennels available for those who need shelter for a pet.

Forrester said that while Serenity primarily serves domestic abuse victims in Baxter and Marion counties, they regularly take residents from Fulton, Izard, all over Arkansas and parts of Missouri.

“Sometimes they just need to get further away from their abuser,” Forrester said.

After putting in time as an advocate, Forrester became a program manager, shelter manager and then shelter director.

She moved to Mountain Home in 1989 from Sussex, Wis., just outside of Milwaukee, and earned a bachelor of science degree in criminology, with a minor in sociology from Arkansas State University-Mountain Home.

In the time she has been with Serenity, the biggest change Forrester has seen is in the facility, located at 1015 U.S Hwy. 62 West. Both the shelter and Serenity offices are located in the same building, where previously they had been separate.

“This has allowed us to double the number of clients we can assist,” she said.

While some women’s shelters don’t disclose their addresses, Serenity’s facility is armed with several security cameras, and anyone coming to the office or shelter needs to be buzzed in.

A number of restaurants, including Gaston’s, make regular donations of leftovers to the shelter. Area churches, civic groups and community organizations also donate food, along with cleaning supplies, clothing and toiletries.

“We appreciate the great community support we receive,” Forrester said. “If we post any of our needs on Facebook, we almost always get it quickly.”

Current shelter needs include a vacuum to replace one that is no longer working properly. Forrester said they can almost always use the donation of tradesmen like carpenters and plumbers to work on odd repairs that occasionally come up.

Once a resident gets settled into the shelter and acclimated to community living, Serenity caseworkers come up with a new action plan for the residents. They can assist them in setting up orders of protection against their abuser, and help them sign up for SNAP and housing benefits.

With Serenity’s Donation Station and The Purple Door, residents and their children are provided with a voucher so they can get clothing at no charge, if they fled their abuser without a chance of packing any clothing.

And once a resident transitions out from the shelter into housing of their own, Forrester said Serenity does what it can to help clients set up a new household. Without regular physical and financial donations from the community, she said they would not be able to help.

“We recently realized we were sending these clients out with can goods, but were forgetting to send them can openers,” she said with a laugh. “So, we can always use can openers.”

Once on their own, residents still have access to Serenity resources for themselves and their children.

For information on upcoming events and activities, visit their Facebook page at https://www.facebook.com/Serenityinc.org/