WASHINGTON/NEW YORK (Reuters) – The U.S. coronavirus death toll climbed above 58,000 on Tuesday, surpassing the loss of American life from the Vietnam War, as Florida’s governor met with President Donald Trump to discuss an easing of economic restraints.

Florida Governor Ron DeSantis, among the latest to lock down his state against the pandemic, has been weighing whether to join other states in a relaxation of workplace restrictions and stay-at-home orders that have been credited with slowing the contagion but which have battered the economy.

DeSantis’ meeting at the White House came as Florida reported its highest single-day death toll from the coronavirus, and two days before Florida’s stay-at-home order was due to expire.

Speaking to reporters with Trump in the Oval Office, DeSantis said he would announce a plan on Wednesday for a “phase one” loosening of restrictions on economic activity.

Declining to give details, DeSantis called the plan a “small step,” adding, “we’re going to approach it in a very measured, thoughtful and data-driven way.”

Despite a high proportion of elderly residents, who are especially vulnerable to the virus, and having waited until early April to lock down its economy, Florida has averted the worst of the health crisis seen in other states such as New York and New Jersey.

Still, Florida would become the most populous of about a dozen states forging ahead with economic reopenings despite a lack of wide-scale virus testing and the means to trace close contacts of newly infected individuals, as recommended in White House guidelines on April 16.

Public health experts have warned that a premature rollback of social-distancing policies could trigger a resurgence of infections just when those restrictions are showing signs of bringing the outbreak under control.

While DeSantis’ state has so far been spared the worst of the pandemic, Florida reported a record 83 new deaths and more than 700 new infections from the previous 24 hours on Tuesday. The state has so far tallied 32,846 cases of COVID-19, the disease caused by the virus, including 1,171 deaths.

DeSantis has drawn sharp criticism of his handling of the health crisis from Democrats in Florida, a key electoral swing state in Trump’s Nov. 3 re-election bid.

“Apparently Trump and DeSantis find it appropriate to slap each other on the back while Floridians struggle to stay safe during this pandemic and navigate a broken unemployment system,” Florida Democratic Party Chair Terrie Rizzo said.

Boston EMS medics work to resuscitate a patient on the way to the ambulance amid the coronavirus disease (COVID-19) outbreak in Boston, Massachusetts, U.S., April 27, 2020. REUTERS/Brian Snyder

Economic fallout from the unprecedented clamp-down on social interactions and business has been devastating.

The number of Americans seeking jobless benefits over the past five weeks has soared to 26.5 million – nearly one in six U.S. workers – and the Trump administration has forecast an April unemployment rate exceeding 16%.

One senior White House economic adviser, Kevin Hassett, said the nation faces the “the biggest shock since the Great Depression” but also predicted a strong rebound in the fourth quarter as the coronavirus fades.

Outbreaks among employees of several leading U.S. meatpacking companies – deemed essential businesses during the crisis – have halted operations at about 20 slaughterhouses and processing plants where tight working conditions make it difficult to practice social distancing.

The larger human toll has likewise been staggering. As of Tuesday, 58,605 have died of COVID-19 in the United States, according to a Reuters tally, eclipsing in a few months the total number of Americans killed during 16 years of U.S. military involvement in Vietnam.

The number of known U.S. coronavirus infections has doubled over the past 18 days to more than 1 million. The actual count is believed to be higher, with state public health officials cautioning that shortages of trained workers and materials have limited testing capacity, leaving many infections unrecorded.

As further evidence that caution may still be in order, an influential University of Washington research model often cited by White House officials and public health officials revised its projected U.S. coronavirus death toll upwards on Tuesday to more than 74,000 by Aug. 4, against its previous forecast of 67,000.

The model showed that while most states appeared to have reached the crest of the pandemic, seven others including Mississippi, Texas, Utah and Hawaii, may be just peaking now or in the coming weeks.

About 30% of American cases have occurred in New York state, the epicenter of the U.S. outbreak, followed by New Jersey, Massachusetts, Illinois, California, Pennsylvania and Michigan.

In California, Governor Gavin Newsom said curbside retail, manufacturing and other “lower-risk workplaces” should reopen within weeks as testing and contact-tracing improve. 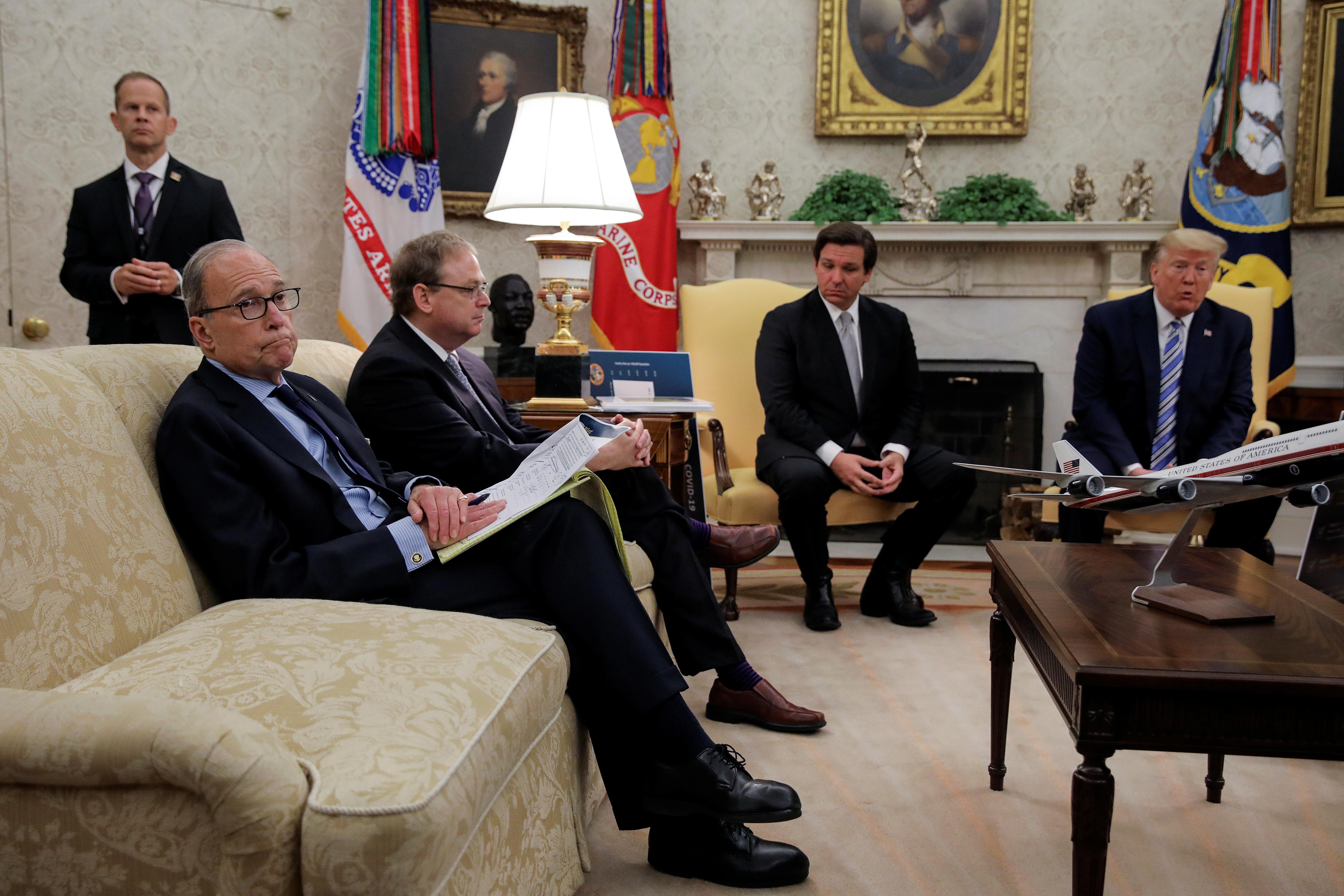 He also said California’s public education system could welcome students back as early as July to make up for a “learning loss” during school closures and to allow parents in the broader workforce to return to work.

The virus was first reported late last year in China. The earliest-known U.S. deaths came in February on the West Coast.