FORT BRAGG, N.C. (Reuters) – For many of the soldiers, it would be their first mission. They packed up ammunition and rifles, placed last-minute calls to loved ones, then turned in their cell phones. Some gave blood.

The 600 mostly young soldiers at Fort Bragg, North Carolina, were headed for the Middle East, part of a group of some 3,500 U.S. paratroopers ordered to the region. Kuwait is the first stop for many. Their final destinations are classified.

“We’re going to war, bro,” one cheered, holding two thumbs up and sporting a grin under close-shorn red hair. He stood among dozens of soldiers loading trucks outside a cinder block building housing several auditoriums with long benches and tables.

Days after U.S. President Donald Trump ordered the drone killing of Iranian military commander Qassem Soleimani, raising fears of fresh conflict in the Middle East, the men and women of the U.S. Army’s storied 82nd Airborne Division are moving out in the largest “fast deployment” since the 2010 Haiti earthquake.

U.S. Army Major General James Mingus waded through the sea of camouflage-uniformed men and women as they prepared to leave the base near Fayetteville on Sunday. He shook hands with the troops, wishing them luck.

One soldier from Ashboro, Virginia, said he wasn’t surprised when the order came.

“I was just watching the news, seeing how things were going over there,” said the 27-year-old, one of several soldiers Reuters was allowed to interview on condition they not be named. “Then I got a text message from my sergeant saying ‘don’t go anywhere.’ And that was it.”

Risks seemed to be pushed to the back of the minds of the younger soldiers, though many packed the base chapel after a breakfast of eggs, waffles, oatmeal, sausages and 1,000 doughnuts.

One private took a strap tethered to a transport truck and tried to hitch it to the belt of an unwitting friend, a last prank before shipping out.

‘THIS IS THE MISSION’

The older soldiers, in their 30s and 40s, were visibly more somber, having the experience of seeing comrades come home from past deployments learning to walk on one leg or in flag-draped coffins.

“This is the mission, man,” said Brian Knight, retired Army veteran who has been on five combat deployments to the Middle East. He is the current director of a chapter of the United Service Organizations military support charity.

There was lots of wrestling holds as the troops tossed their 75-pound (34 kg) backpacks onto transport trucks. The packs hold everything from armor-plated vests, extra socks and underwear, to 210 rounds of ammunition for their M-4 carbine rifles.

A sergeant pushed through the crowd shouting for anyone with type-O blood, which can be transfused into any patient.

“The medics need you now. Move,” he said, before a handful of troops walked off to give a little less than a pint each.

While members of the unit – considered the most mobile in the U.S. Army – are used to quick deployments, this was different, Lieutenant Colonel Mike Burns, an Army spokesman.

“The guys are excited to go but none of us know how long they’ll be gone,” Burns said. “That’s the toughest part.”

Soldiers were ordered not to bring cell phones, portable video games or any other devices that could be used to communicate with friends and family back home, out of concern that details of their movements could leak out.

“We’re an infantry brigade,” Burns said. “Our primary mission is ground fighting. This is as real as it gets.”

A sergeant started rattling off last names, checking them off from a list after “heres” and “yups” and “yos.”

For every fighter, there were seven support crew members shipping out – cooks, aviators, mechanics, medics, chaplains, and transportation and supply managers. All but the chaplains would carry guns to fight.

A senior master sergeant, 34, said: “The Army is an all-volunteer force. We want to do this. You pay your taxes and we get to do this.”

The reality of the deployment wouldn’t sink in until the troops “walk out that door,” he said, pointing to the exit to the tarmac where C-4 and C-7 transport planes and two contract commercial jets waited. 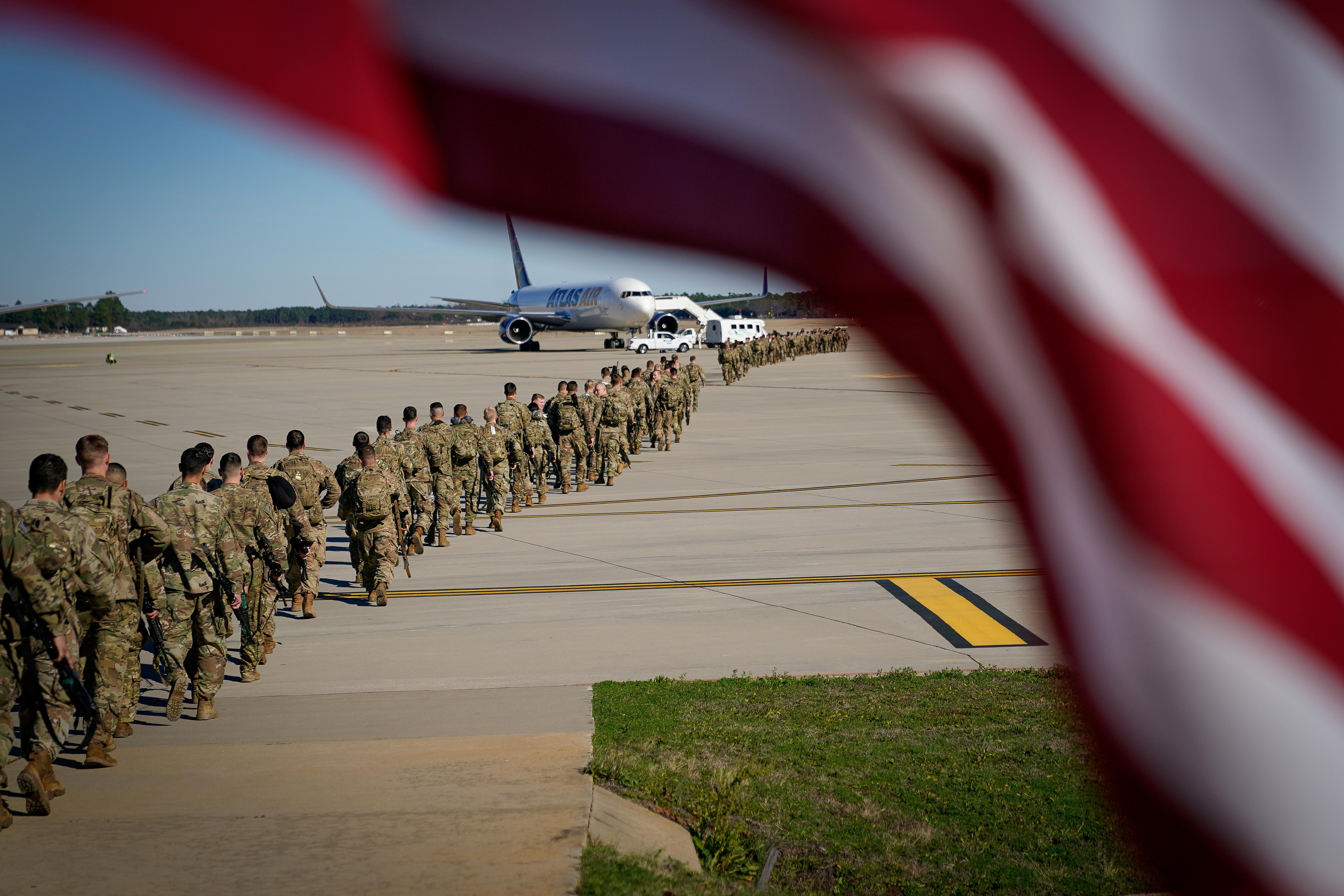 His call came when he was on leave in his hometown of Daytona Beach, Florida, taking his two young daughters to visit relatives and maybe go to Walt Disney World.

“We just got there and I got the call to turn right around and head back to base,” he said. “My wife knows the drill. I had to go. We drove right back.”

On a single order, hundreds of soldiers jumped to their feet. They lined up single file and marched out carrying their guns and kits and helmets, past a volunteer honor guard holding aloft flags that flapped east in the January wind.