MANCHESTER, N.H. (Reuters) – A parade of 19 presidential hopefuls courted New Hampshire Democratic activists at a day-long convention on Saturday, touting their ability to unite the party and offering their visions for how to beat U.S. President Donald Trump in 2020.

In a series of 10-minute speeches, the contenders accused Trump of sowing hate and threatening democracy, calling the 2020 election a referendum on what kind of country the United States would be.

“This president has unleashed the deepest, darkest forces in this nation,” Democratic front-runner Joe Biden told the convention. “We cannot and I will not let this man be re-elected president of the United States of America.”

New Hampshire holds a pivotal early nominating contest in the Democratic race to pick a challenger to Trump, and the convention offered a chance for thousands of the state’s party activists to get a sense of the contenders.

It also offered U.S. Senator Elizabeth Warren of Massachusetts a chance to show her growing strength in the state. Warren received the loudest reception of the convention, pausing frequently for her chanting, cheering supporters.

“This is how we build a movement,” Warren said.

Opinion polls show former vice president Biden, who got a polite but restrained reception, holds a narrow lead in the state over Warren and U.S. Senator Bernie Sanders of Vermont, who won the state’s primary with 60% of the vote during his failed 2016 White House bid and also received a loud reception on Saturday.

But party leaders and the candidates said there was plenty of potential for changes at the top or a late charge by a lower-tier candidate, as many Democrats are still evaluating their options in the crowded field.

Several candidates, including former U.S. Housing Secretary Julian Castro, and Mayor Pete Buttigieg of South Bend, Indiana, said there was a thirst for some new faces.

“We need a new generation of leadership,” Castro told reporters, saying he could restore the coalition of young, minority and infrequent voters who elected Barack Obama to the White House twice.

U.S. Senator Cory Booker said Democrats would have to come together behind the eventual nominee in order to beat Trump.

“We cannot tolerate Democrats who turn against other Democrats and try to tear us down,” Booker said. “This election is not about some purity test, that if you don’t mark every box correctly you’re not a good Democrat.”

U.S. Senator Amy Klobuchar of Minnesota, who has offered a more moderate platform than many of the contenders, told reporters there was a vast pool of voters in the middle looking for a choice.

“There are so many moderate Republicans and independents who are sick and tired of this guy,” she said of Trump. “I’m betting that people don’t want the loudest voice anymore.”

The convention comes at a crucial moment. It falls between last weekend’s Labor Day holiday, the traditional end of the summer vacation season and kickoff to more intensive political campaigning, and next week’s third Democratic presidential debate in Houston, which will give the top 10 contenders another national platform.

For candidates who did not make the third debate, the convention was a badly needed opportunity for exposure. U.S. Senator Michael Bennet of Colorado brought along former U.S. Senator Gary Hart, the winner of the New Hampshire primary in 1984, who endorsed Bennet.

“I don’t see a reason to stop based on the polls,” Bennet told reporters.

All of the Democratic contenders except Wayne Messam, the little-known mayor of Miramar, Florida, attended the convention on Saturday.

Tickets to the dinner were offered for sale to the campaigns, meaning the most well-funded and organized were able to pack in supporters and display their political muscle.

Warren, Sanders, Harris, Booker and other candidates had big contingents of chanting, drumming, sign-waving supporters outside the entrance of the main arena early, and many poured inside to cheer the speeches.

While the seven-hour program runs counter to the traditional New Hampshire approach of face-to-face campaigning, it can still give people a sense of the contenders. 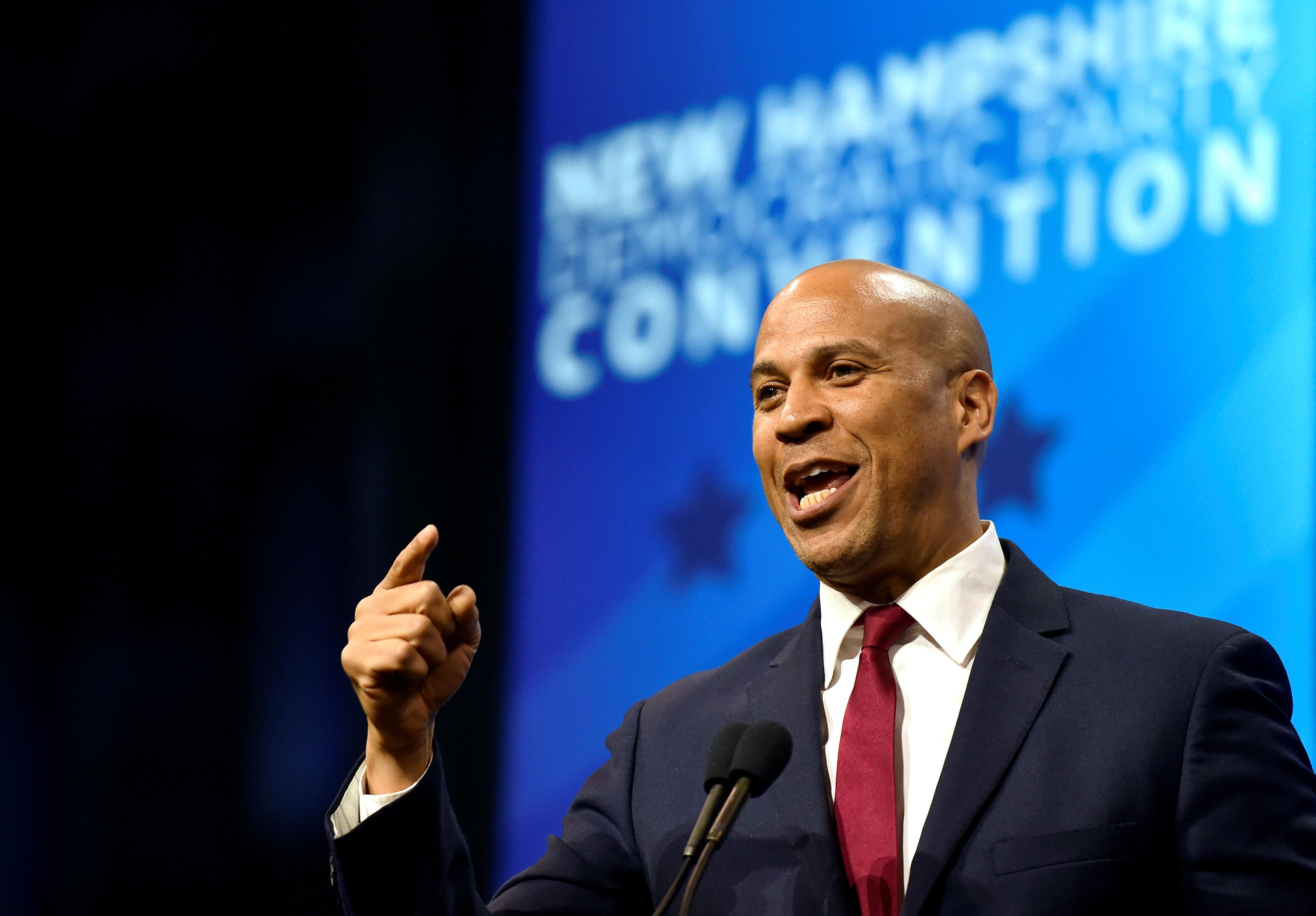 New Hampshire Democrats recall a well-received 1991 state convention speech by a relatively unknown Arkansas governor, Bill Clinton, which helped propel him to a better than expected second-place finish in the 1992 state primary and ultimately to the White House.

“This could be a game changer for a couple of candidates,” said Ray Buckley, chairman of the New Hampshire Democratic Party.